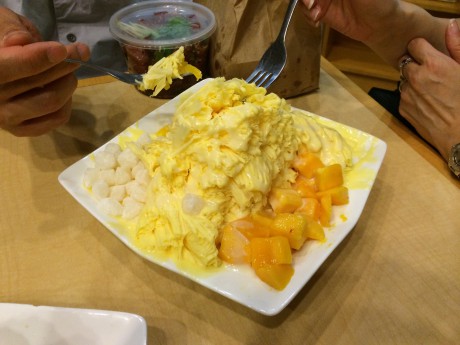 Add shaved snow to the list of frozen desserts that you need to try. I think this originated in Taiwan, or perhaps from Taiwanese creators as an alternative to shaved ice.  While similar in concept to Hawaiian shaved ice or the Sno-Balls I grew up with in New Orleans, the shaved part is not just plain frozen water. It has more of a creamy sherbet feel to it. The blocks are frozen and then a machine takes thin shavings, which are piled onto plate. The net result is a texture that is not coarse or icy like shaved ice, but a “snow” like texture which does not rely on toppings or a syrup to flavor the dessert.

Snozen has the normal snow flavors that I have seen at other places like chocolate, vanilla, mango, taro. But they also have peanut butter and black sesame as well.  The snow serves as a base on which you can add various toppings, such as fresh fruits, mochi,  and various “drizzles”, like chocolate syrup, caramel, etc.  Something unique is their black sesame drizzle, which is black sesame paste combined with condensed milk.  It’s pretty darn tasty, even with taro snow.  While you can freely mix and match, they also have cutely named, pre-configured combinations, like the Elvis special, which is peanut butter snow with fresh bananas and chocolate drizzle. 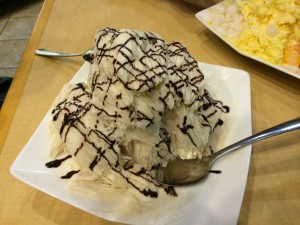 What I like about Snozen’s version of shaved snow is it is not overly sweet and the flavor is not so overpowering that I feel like I am eating shavings from a creamsicle or frozen juice bar. There is also a slight richness similar to ice cream or frozen yogurt. This makes sense, as you don’t want the snow base to overpower any of the toppings that are added.

Prices are on par with other frozen desserts, and the large size (pictured above) is more than adequate for sharing between two people. If you are in a large group, I would order a few different flavors/combinations and share family style to try out.

Parking can be an issue, as it is located in a townhome/condo complex where street parking is limited and often taken by residents; however, outside of business hours, you can park in the CalTrain garage that is located beneath some of the condos. Or you can park further up  Pacchetti Way toward California Street.

We’ve been here a few times and have never been disappointed with our selections.  So skip dessert at the restaurant and go to Sno-Zen.  There is another Snozen in downtown San Jose, and another opening up in the Silver Creek area as well. 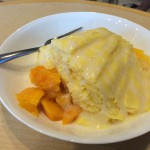 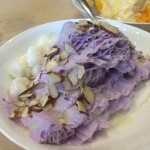 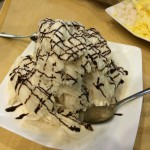 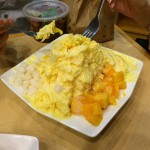